Todd Anthony - Our newest member, Guitarist.  Grew up in Motor City (Detroit area) playing in the local rock scene in the '80s, '90s, and 2k.  Played local gigs, festivals, and the battle of the bands. Won a few of them.

Played and recorded with a group called Assassin, and other Detroit local cover bands.

Style is basically Guitar Rock and blues.  You know those long 12-minute guitar solos like Stranglehold and Too Rollin Stoned.  Inspired by so many of the greatest Guitarists.  Enjoy writing and recording music and will do session work.

A former student of Blues guitar great,  Robbie Noll.  Check him out !!  He is great and he played in Albert Collins and along with other blues greats.

Currently, lives in Ohio and played in the band Renagade.  A Great Southern Rock tribute act and part of the three guitar slinger attack. 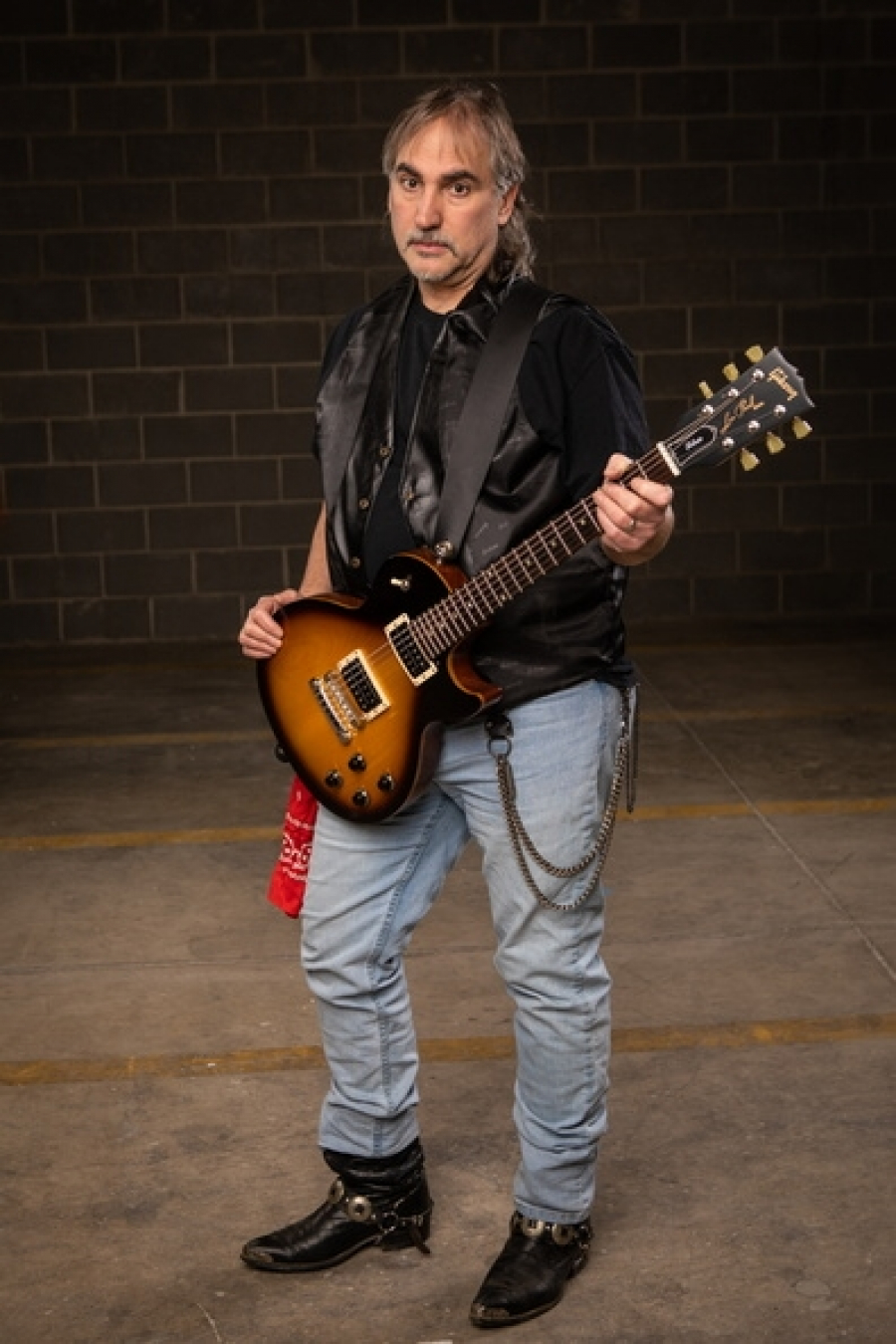 Bill has been on the Cleveland music scene since 1977. You can hear early influences of Jack Bruce, John Entwistle, and Chris Squire in his playing style. Played with The Randy Sabo Band (former member of Michael Stanley’s original band Silk), also Blue Taxi with Billy Capuano. Bill has shared the big stage with Sonny Geraci, Question Mark and the Mysterians, and Billy J. Kramer. Opened up with Blue Taxi for such bands as Steppenwolf, The Guess Who, Warren Haynes, Steve Miller & Spirit.

Bill is excited to join with these talented musicians known as Yearbook.  With a few gigs already under our belts, the band seems to be  blossoming as a coherent driving force of musicianship to provide a fun entertaining evening. Whether you want to dance the night away, or sit back, enjoying your favorite beverage, Yearbook will provide everyone with a pleasurable night out.

2023 Brought us our new member Todd Samaritani. Todd came to us from a wide variety of bands and music backgrounds and has played with many of the area's top musicians. His addition has opened the door to a wide variety of artists including Pink Floyd, ELO, Billy Idol, and a host of others. 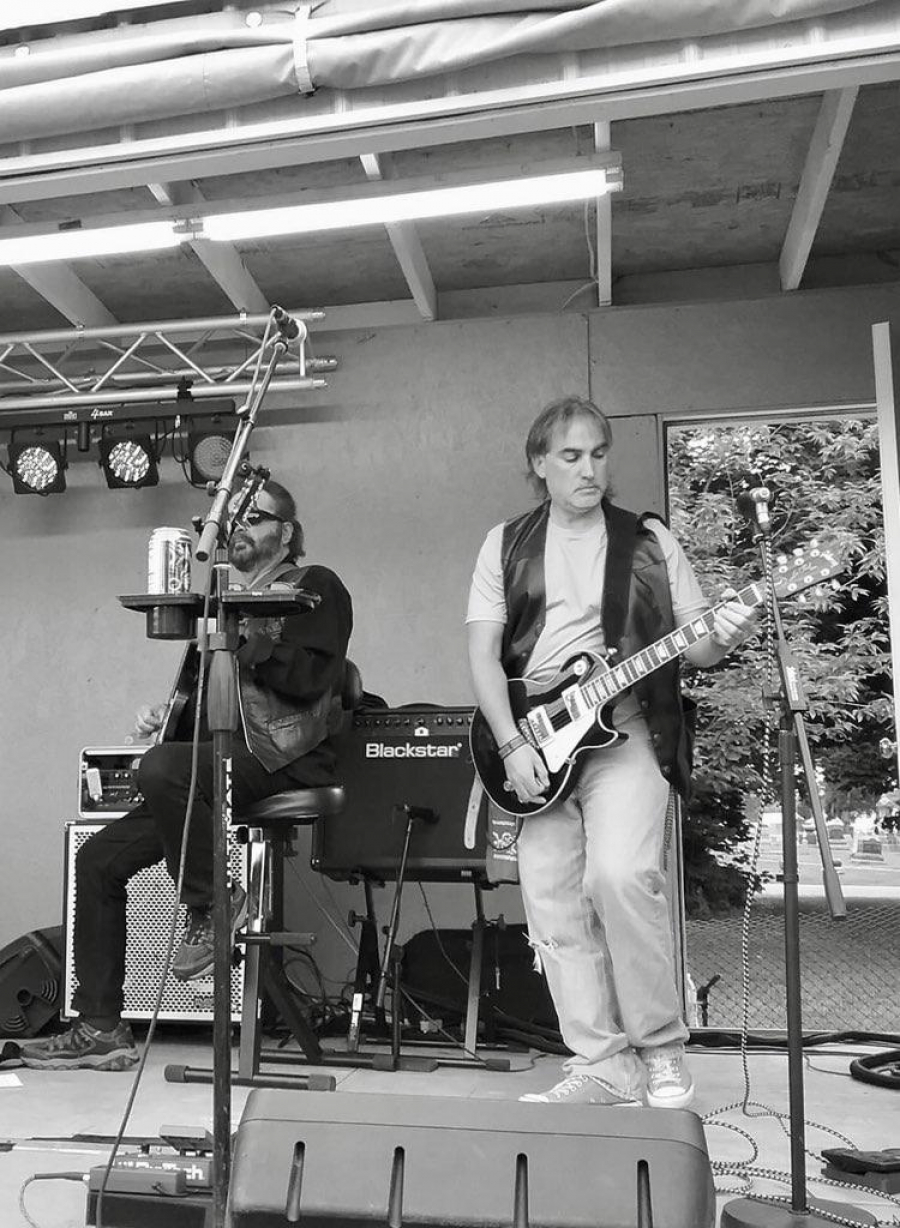 Rob Johnston enters his twenty-eigth year as the drummer and lead vocalist with YEARBOOK. 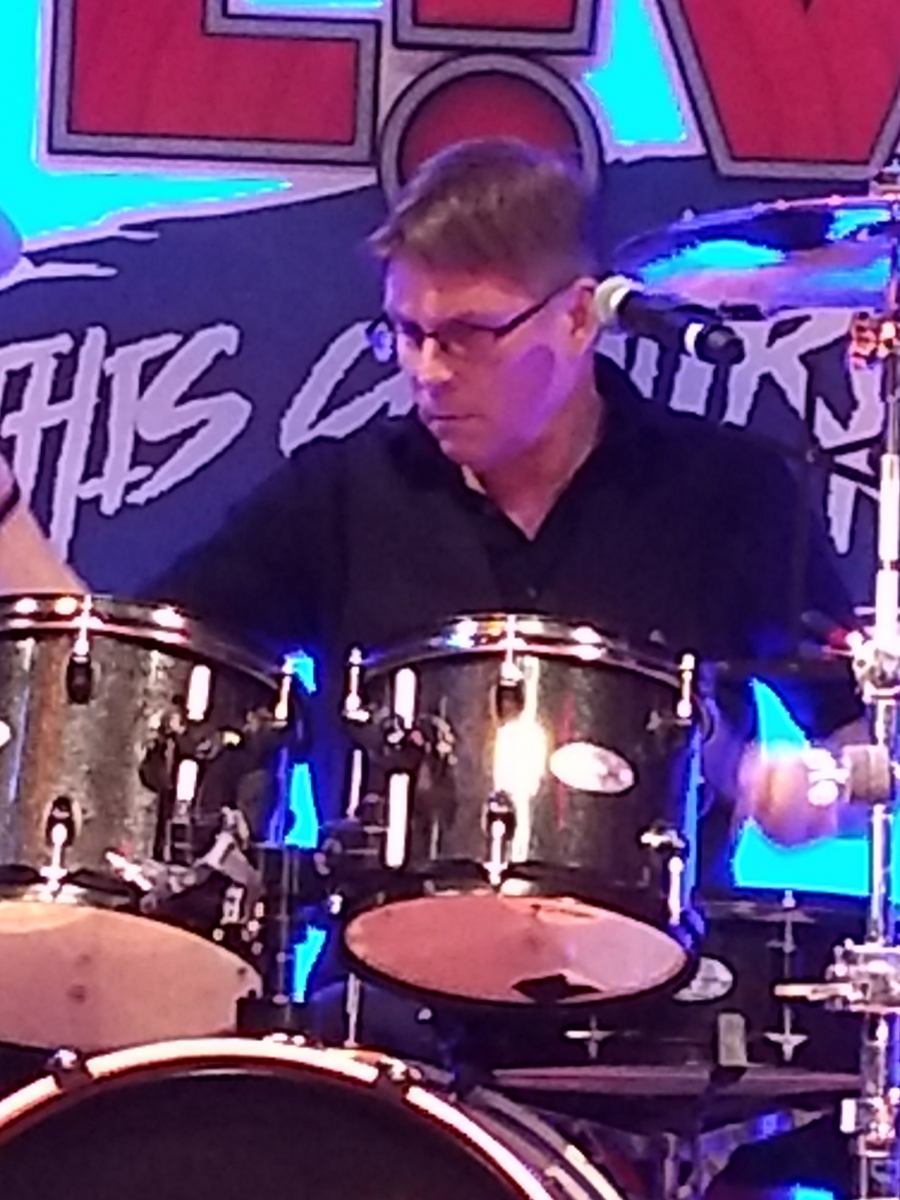 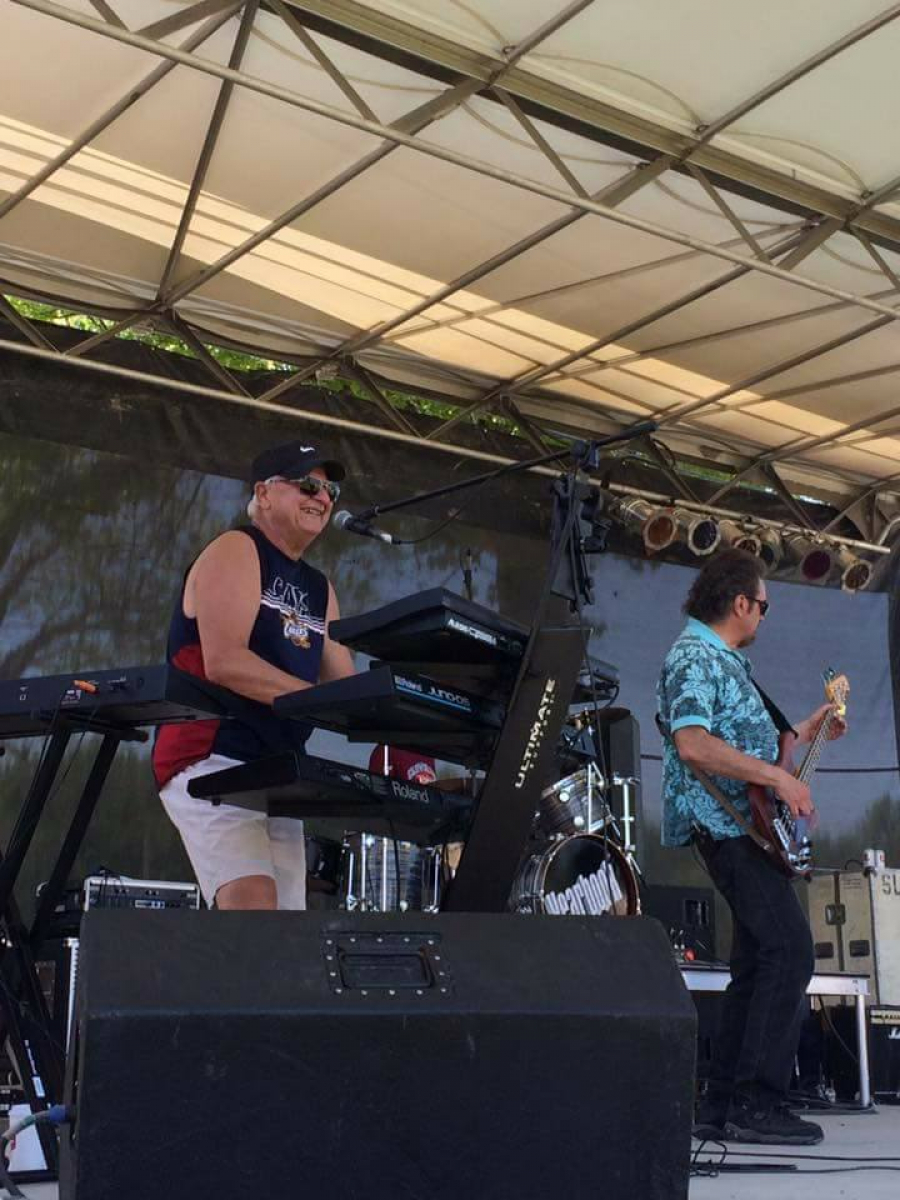 A little bit of YEARBOOK History

Jonathan Yokiel | Special to The Gazette
Yearbook is a classic rock band that has been together for more than 20 years.
But Thursday night was the first time the band, made up of Medina natives, had played the Medina County Fair. As soon as they started playing, many audience members began singing the words of the popular songs they knew.
Yearbook has played before at free, open shows in Northeast Ohio, many in Medina and Cuyahoga counties.
But the audience at the fair was different, with members of all ages. Younger people in the crowd danced and knew the words to some songs, too.
The group performs rock hits from the 1960s to the 1980s, with selections from groups such as Pink Floyd, The Beatles, and Bad Company.
This year Yearbook has had shows at Cedar Point and has been a part of the Brunswick Summer Concert Series.
The band has future gigs coming at the Elyria Parks Concert, the Concert in Middleburg Heights, and the West River Caf￩.
Band members said in interviews that there have been changes over the years but they think of themselves as a happy family. Their playlist has been moving toward Motown, dance rock, and classic rock.
Joe Salem is the last original member of the band, which formed in 1993. Along with playing the keyboard and singing vocals, he acts as the group’s manager, organizing bookings and promotions.
“My favorite part of playing our music is the reaction from the crowds. Most people who come out to watch us listened to this music when they were younger, so it is fun to see them hear it again,” Salem said.
Other members are Rob Johnston, drums and lead vocals; Chip B., bass/vocals; and Thomas Javorsky, lead guitar and backup vocals.
They all have other careers, in addition to performing.
Johnston joined Yearbook in 1998. Besides making the rhythm section, he also adds to the band’s vocals. After his addition, the vocals have become a larger part of Yearbook’s overall sound.
Chip B. played in three bands before Yearbook and supplies the low sound from his bass. Javorsky said he has always loved playing guitar.
The band members believe their playlist is still popular because it is different from modern songs heard today.
The group estimated that the ages of the audience members can range from the 20s to the 70s, but band members said they usually see middle-aged crowds, ages 40 to 60.
Although Yearbook doesn’t see many teens at its shows, there are some who appreciate classic rock.
“I enjoy older music because there are so many more meanings and stories. While today’s radio hits revolve around partying, older music could have been about anything — friends, love, you name it,” said Maggie Raiff, a freshman at Brunswick High School.
“My favorite band from the 1960s is most definitely The Beatles,” she said. “They changed the face of music and how people react to songs.”
Aaron Ogorzaly, another Brunswick freshman, said, “I sometimes enjoy older music (more) than recent songs because the stories have a meaning that I … can actually relate to. Many older songs can boost you up and brighten your day.”
Another Brunswick freshman, Melissa Dulik, said, “I like to see how different music was during different times because it really gives a glimpse of what it was like to live in that day and age.”
Information about Yearbook is available online at http://jsalem.bandvista.com.
Jonathan Yokiel, a ninth-grader at Brunswick High School, is one of 42 “backpack journalists” in the award-winning Brunswick Schools video program. Visit www.brunswickschoolsvideoprogram.org to learn more about the program or go to thebeat.pegcentral.com  to view videos produced by the students.

Edit this text to display whatever you want to your users.

Many aspects of YEARBOOK have changed for 2023. We continue with a new lineup which changed in October 2022. The current lineup features Todd Samaritani on guitars and vocals, Bill Uhler on Bass and Vocals, Joe Salem on Keyboards and Vocals, and Rob Johnston on Drums and Vocals.

The Song list has changed with the addition of many requested favorites including Pink Floyd, Chicago, More Beatles, ELO, Grand Funk Railroad Roxy Music, Paul McCartney , Billy Joel , Alan Parsons ,and many more. Many of the song additions are additions based on e-mails and Web site requests received this year.

Many new and old venues have been added to the schedule for 2023 with the return of  Hudson First and Main,  Charlies Tikki Bar Marblehead,, The Harvest Saloon, The Shore's Club, Charlie's on the beach, and many more.

These are just a few of the NEW ASPECTS for 2023. Keep your eye here and on FaceBook for more to come.

We have added several new venues for2023 Beginning with The Tiki Bar Marblehead, The Shore's Club, Charlie's on the Beach ,The Harvest Saloon, Hudson First and Main, Willow Lake and many more.

YEARBOOK to PERFORM AT HUDSON FIRST AND MAIN

We are happy to announce the addition of a concert at HUDSON FIRST AND MAIN , an outdoor concert from 7Pm to 9 Pm. This concert will take place on August 11,2023 and it is open to the public. Keep your eye on our web site or Facebook for upcoming information.